David and I just returned from Disney today, What a fun time.  Two and a half days alone with my husband, what a treat!

Yes, we were just in Disney in July, but that was with four kids, which had its drama and I was exhausted at the end of the trip.

Florida this October weekend was cooler, and actually invigorating.

We stayed at the time share – Summers Bay, which is a timeshare my husband has from way back.  We went down for an owners meeting, that turned out to be a sales pitch.  We did not let that stop our good time, and it was interesting to hear their offers.  They start with a deal for $11,600 upgrade, then only $8,000 for a lesser version, then $4000, then $3000.   I learned alot, so my time did not feel wasted, but don’t think I will be sitting thru one of those again soon.

The rest of the weekend was wonderful.  Sharing some pictures of us at Universal City Walk, we also enjoyed an afternoon at Disney Springs (used to be Downtown Disney). 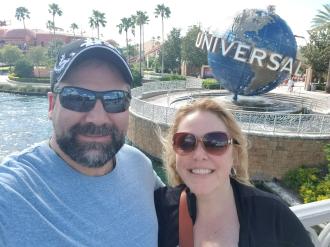 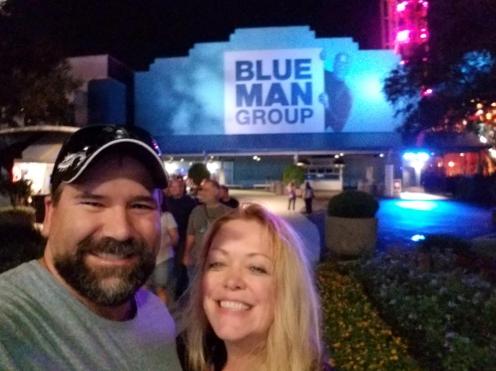 Ok, so reviewing the images, I realize, we  saw the blue man group show, and then mostly ate.

We stopped at the Toothsome Chocolate Emporium at Universal City Walk … they specialize in milkshakes, wow they looked amazing, the table behind us was a birthday party and they had one each.  We saw them making a potted chocolate cream, which was a pot of what looked like hot fudge – super decadent.  We had the chocolate bread, a peanut butter candy, baked apple macaroon, and a savory chili Brussels sprout dish to counter all the desserts.  I LOVED this place.  Steam punk meets Charlie and the Chocolate Factory.

On Saturday we took a break from eating and cooled down in Disney Springs, Jock Lindsays Hanger Bar.  The cool headed monkey was so lite and refreshing, I want one right now.

We also had a quick snack at Universals City Walk – Camacho Cantina.  The corn pudding in the enchilada was so moist and delicious.   I was just starting to enjoy the mariachi band, when the finished up for the nite.

The nite before we went to Joes Crab Shack and David ate all he could.

We were back home Monday early and we really just love these little escapes.  I forget sometimes just how much I love being with David, and then I Also feel guilty for wanting him all to myself, he is also a wonderful Father and sharing him when were home is important to me, but damn I love all this alone time.

Next alone trip…. Chicago in November for RSNA – Radiological Society of North America.